On this page, you will find a summary and detail for recent research projects by Principal Investigator, Dr. Vera Krischik, and her research staff on beneficial insect and pollinator conservation including biocontrol, land management best practices, and pesticide effects on pollinators and beneficial insects.

Declines in bee populations around the world have been attributed to various factors, one of which is pesticide use. The purpose of this project was to examine the toxicity of several insecticides to bumble bees (Bombus impatiens). We found that chlorantraniliprole (4 ppm), an insecticide commonly used for Japanese beetle control, was less toxic to bees than the neonicotinoid clothianidin (0.02 ppm). Allso, clothianidin resulted in a decrease in brood production and movement. 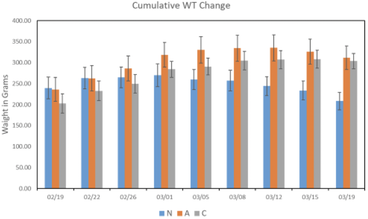 Effects of clothianidin, chlorantraniliprole on bumblebee 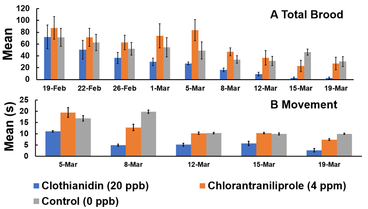 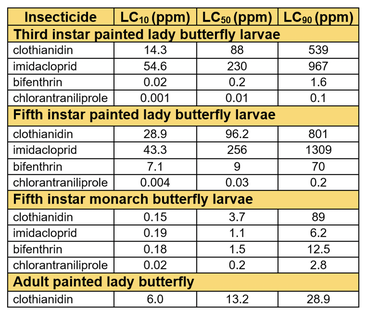 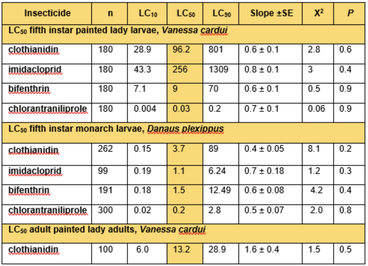 Chronic exposure bioassays were carried out to evaluate sublethal effects of clothianidin (neonicotinoid) on monarch (Danaus plexippus) and painted lady (Vanessa cardui) butterflies. Butterfly larvae were fed treated (0-40 ppb) foliage from third instar to pupation. We found that 40 ppb clothianidin significantly reduced the number of larvae that pupate for both monarchs and painted ladies. In addition, 40 ppb clothianidin resulted in greater mean days to pupation for monarch larvae, while there was no significant effect for painted lady larvae. 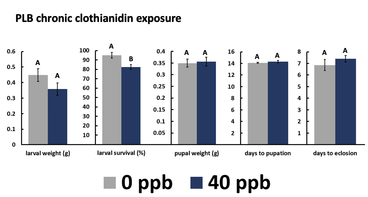 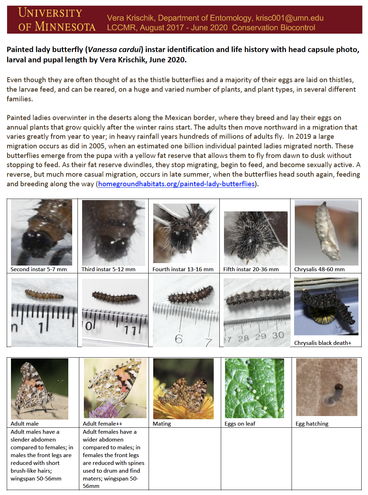 Pesticide residues in wildflowers near crops

Pesticide drift from agricultural applications can be a source of harmful pesticide exposure for pollinators. In this project, we sampled wildflowers on the margins of potato, soybean, and corn fields. For wildflower samples collected on habitat near potato fields in MN, we found that 100% of 36 samples had at least one pesticide and as many as 15 different pesticides.

Pesticide residues in wildflowers near crops 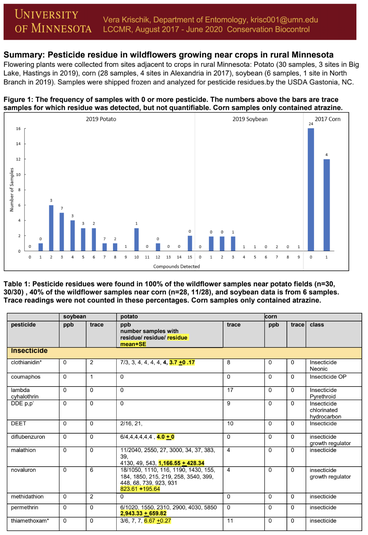 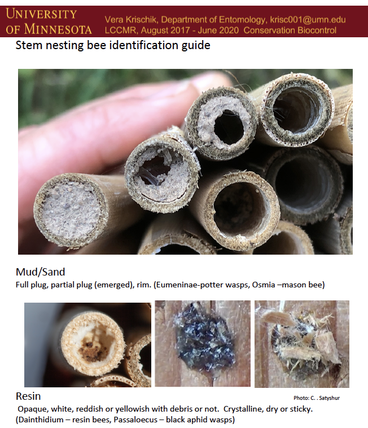 Effects of neonicotinoids on birds

The goal of this study was to determine imidacloprid residue levels in leaves and seeds of green ash trees (Fraxinus pennsylvanica) following a soil drench, and to compare residue levels to lethal and sublethal doses for birds reported in literature. The imidacloprid levels detected in green ash (mean 35 ppb) were not high enough to pose lethal or sub-lethal risks to birds. 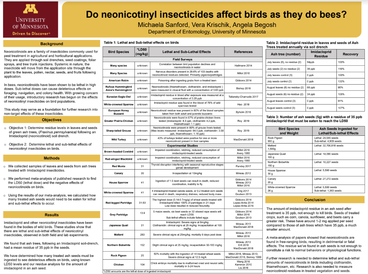 The MN Department of Agriculture and the MN Department of Natural Resources list Japanese beetle (JB, Popillia japonica) as a highly destructive, invasive exotic pest (USDA 2017, CAB 2005). Since introduced from Japan in 1916, JB defoliates over 300 plant species, including, linden trees, basswood trees, apples, corn, and soybean. Adult beetles can aggregate on leaves and fruits and feed in large numbers, that renders the fruit unmarketable. In addition, the immature grub stage feeds on the roots of grasses in pastures, green space, and recreational turf. Japanese beetle damages owers, fruits, and foliage which results in fewer owers and less food for bees, as well as less fruits for wildlife. However, the spraying of insecticides on bee lawns for JB grubs and on plants and owers for adults, probably results in the more pollinator deaths. Fortunately, JB has a natural biocontrol agent that was discovered in 1988 in Connecticut killing JB grubs (Hanula and Andreadis 1988) that needs to be introduced into MN. The microsporidian (fungal) pathogen called Ovavesicula popilliae was studied at Michigan State University (MSU) (Perry et al. 2013, Smitley 2011) and released in four states. MSU identied the pathogen in MN JB. For the long term, research is needed to survey greater MN for the presence of JB and the pathogen, which so far was found in one location in MN. For the short term, IPM programs need to be developed that conserve pollinators and manage JB.The purpose of this research is to develop new management tactics to reduce economic and environmental damage caused by the exotic JB. The outcome is to reduce JB numbers locally and to slow its spread around the state of MN. 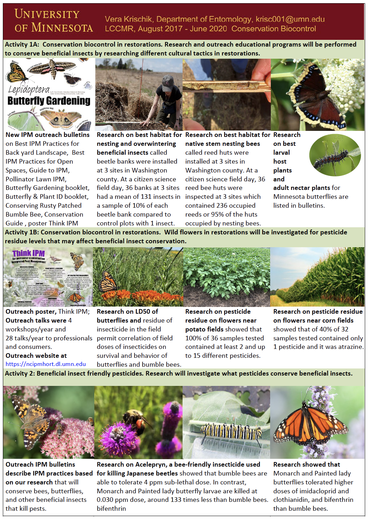 These 2017-2020 conservation biocontrol research and outreach programs were made possible through a grant from the Legislative-Citizen Commission on Minnesota Resources (LCCMR) which makes funding recommendations to the Minnesota Legislature for special environment and natural resource projects on behalf of the citizens of Minnesota.